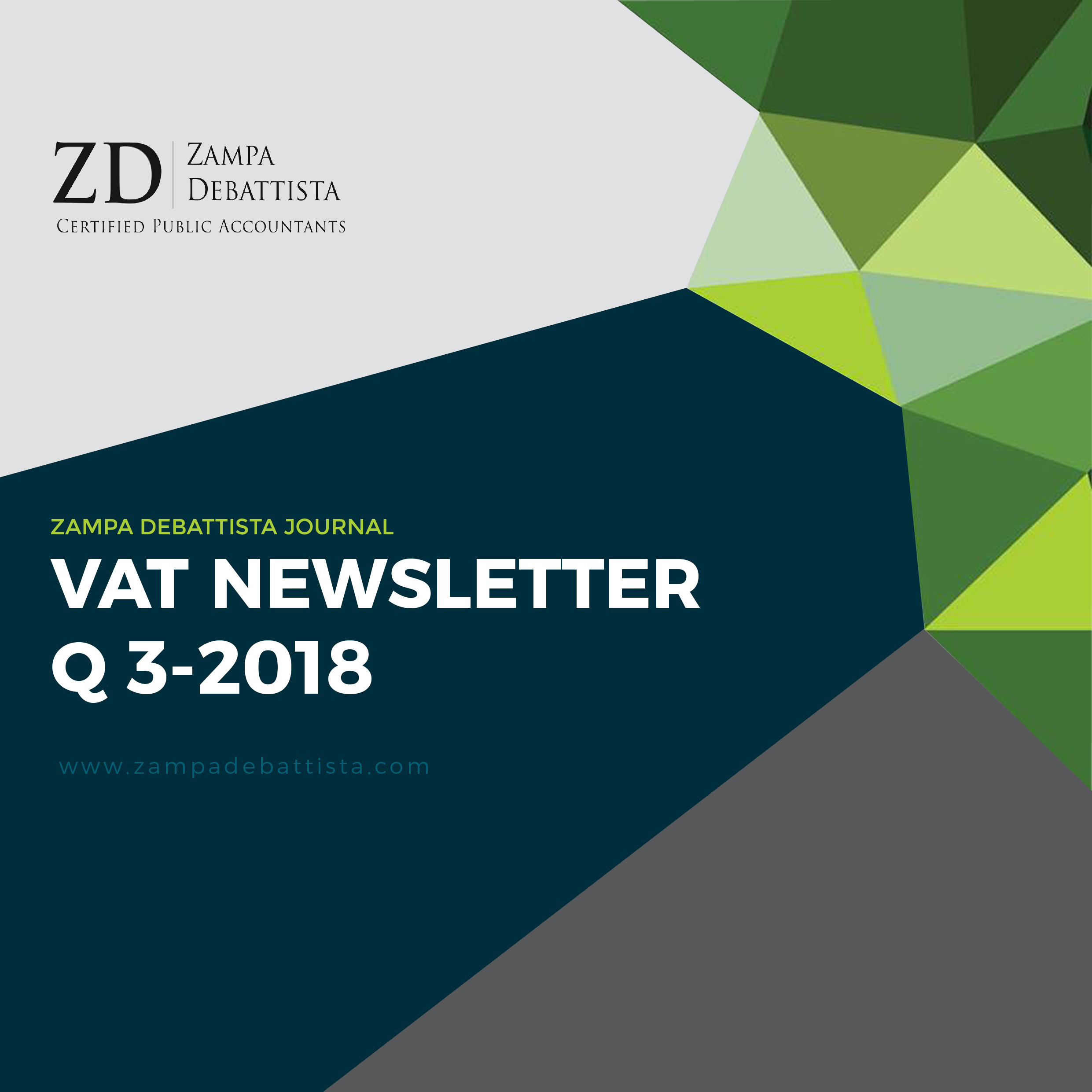 The legal notices transpose Article 1 of Council Directive (EU) 2017/2455 which amends Article 58 of Council Directive 2006/112/EC (the “VAT Directive”). This article provides that the place of supply of telecommunications, broadcasting and electronically supplied to a non-taxable person shall be the place where that person is established, has his permanent address or usually resides. Under the new rule, with effect from 1st January 2019, it shall be the place where the supplier has established his business (i.e., Malta) if, the supplier is established in Malta; the non-taxable persons to whom he supplies the services are established in any Member State other than Malta; and, the total supply of such services does not, in a calendar year or the one preceding it, exceed the threshold of EUR 10 000 exclusive of VAT. However, a supplier has a right to opt, by means of a notice in writing to the Commissioner, to have the supplies taxed in the place where the customer is established, has his permanent address or usually resides (i.e., not in Malta).

1.2   Revised Guidelines regarding the VAT treatment of Yacht and Aircraft leasing

No decisions concerning VAT were published during this calendar quarter.

1.4     Court of Appeal (Inferior Jurisdiction) decisions in the field of VAT

No decisions concerning VAT were published during this calendar quarter.

On 6th July 2018, the VAT Committee published an updated list of guidelines on the VAT treatment of certain specific matters which have been debated and agreed to in the course of the committee meetings. Notwithstanding that they are merely the views of an advisory committee and do not neither constitute an official interpretation of EU law nor necessarily have the agreement of the EU Commission, the guidelines are and remain a valuable point of reference to shed light on how a particular provision is generally interpreted, or a particular operation is treated for VAT purposes within the Community.

The list can be accessed via the following link:

According to the new study published by the EU Commission, it is estimated that almost EUR 150 billion in VAT revenue were lost in the EU countries during 2016. The VAT Gap represents the difference between the expected VAT revenue and the amount actually collected.

In nominal terms, the VAT Gap decreased by EUR 10.5 billion to EUR 147.1 billion in 2016, a drop to 12.3% of total VAT revenues compared to 13.2% the year before. The individual performance of the Member States still varies significantly. The VAT Gap decreased in 22 Member States with Bulgaria, Latvia, Cyprus, and the Netherlands displaying strong performances, with a decrease in each case of more than 5 percentage points in VAT losses. However, the VAT Gap did increase in six Member States: Romania, Finland, the UK, Ireland, Estonia, and France. In Malta the VAT Gap for 2016 was estimated at EUR 20 million or 3% of the VAT total tax liability of EUR 749 million, at the same level for 2015.

On 23rd August 2018 the UK Government published a series of briefs to guide businesses on the implications of VAT rules for goods and services traded between the UK and the EU in the (unlikely) event that the UK leaves the EU without an agreement (the so-called “no deal” scenario). The UK will continue to have a VAT system of indirect taxation after it leaves the EU which in a “no deal” scenario will be functioning as follows:

3 Update of latest CJEU decisions in the field of VAT

By a decision published on 25th July 2018 the CJEU ruled that the exemption in Article 135(1)(d) of the VAT Directive does not apply to a supply of services which consist for the taxable person in requesting from the relevant financial institutions, first, that a sum of money be transferred from a patient’s bank account to that of the taxable person pursuant to a direct debit mandate and, second, that that sum, after deduction of the remuneration due to that taxable person, be transferred from the latter’s bank account to the respective bank accounts of that patient’s dentist and insurer.

DPAS Ltd managed dental plans for customers consisting of an arrangement between a dentist and his patient under which the dentist agreed to provide dental care to the patient, who in return agreed to pay a specified monthly rate by direct debit mandate. The payment included also an insurance for certain risks not covered by the dental plan as well as DPAS’s administration fee. Upon receipt of the monthly payment from patients, DPAS paid the dentists the aggregate amounts due to them in respect of all their patients less the relative amount due to the insurers and its administration fee. The Tax administration took the view that given that the dental plans had been concluded solely between DPAS and the dentists, the transactions carried out by DPAS constituted “transactions in payments” within the meaning of Article 135(1)(d) of the VAT Directive and consequently were exempt from VAT. However, when DPAS restructured the contractual aspects of the dental plans by splitting it in two, as one with the dentists and a separate one with the patients, the Tax Administration concluded that the services now consisted in the management of a plan by DPAS and hence subject to VAT.

On the basis of the facts at issue in the main proceedings the CJEU concluded that the supply of services by DPAS does not, as such, effect the legal and financial changes which characterise the transfer of a sum of money within the meaning of CJEU settled case law concerning transfers, but is administrative in nature. DPAS does not itself carry out the transfers or the materialisation in the relevant bank accounts of the sums of money agreed in the context of the dental plans but asks the relevant financial institutions to carry out those transfers, in a way which is comparable to card handling fees.

By a decision published on 7th August 2018 the CJEU ruled that Articles 167 and 168 of the VAT Directive and the principle of neutrality must be interpreted as precluding the tax authority of a Member State from regarding a company which has its headquarters in another Member State and the branch which it has in the first of those Member States as constituting two separate taxable entities on grounds that each of those entities has a tax identification number and for that reason from refusing that branch the right to deduct the VAT on debit notes issued by an EIG[1] of which that company, and not its branch, is a member.

TGE Gas Engineering GmbH, a company established in Germany and incorporated under German law (“TGE Bonn”), obtained a VAT identification number in Portugal as a non-established taxable person for the purpose of a one-off act, namely the acquisition of shares. Subsequently, it registered a branch in Portugal TGE Sucursal em Portugal (“TGE Branch”) as a non-resident entity. It transpired that for the purpose of implementing a particular project, specifically the extension of a liquified gas terminal in Portugal, TGE Bonn formed an EIG with other Portuguese entities (“EIG Projesines”). Subsequently the TGE Branch concluded a subcontract with EIG Projesines providing for reciprocal performance with the latter obliged to invoice its costs to TGE Branch. For the purpose of this invoicing EIG Projesines used the TGE Branch VAT registration number rather than that of TGE Bonn. During a tax audit of the TGE Branch, the tax authority concluded that since TGE Bonn and TGE Branch are two different entities, each having a separate VAT identification number and given that TGE Branch was not a constituent member of the EIG, its costs could not be attributed to the TGE Branch. As a result, TGE Branch was requested to reimburse the VAT it had deducted in relation to those costs.

The Court recalled that according to settled case law a company established in one Member State and its branch located in another Member State constitute a single taxable person subject to VAT, unless it is established that the branch carries out an independent economic activity particularly whether in independently carrying out this activity it bears the associated economic risks. It followed that TGE Bonn and TGE Branch constitute a single taxable person within the meaning of the VAT Directive. With regard to the right of deduction, again referring to settled case law, the Court remarked that the principle of fiscal neutrality requires that a single taxable person is to be allowed a right of deduction so long as the substantive requirements covering the deduction are satisfied. It follows therefore that a Member State cannot impose requirements which render that right ineffective such as refusing it on the sole ground that the taxable person used a tax identification number as a non-resident entity without a fixed establishment at the time of the formation of the EIG and used the tax identification number of its branch located in that Member State for the re-invoicing of the costs of that group.

While every effort was made to ensure that the contents of this newsletter are accurate and reflect the current position at law and in practice, we do not accept any responsibility for any damage which may result from a change in the law or from a different interpretation or application of the local law by the authorities or the local courts.

The information contained in the newsletter is intended to serve solely as a guidance and any contents of a legal nature therein do not constitute or are to be interpreted as legal advice. Consulting your tax practitioner is recommended in case you wish to take any decision connected to contents of this newsletter.