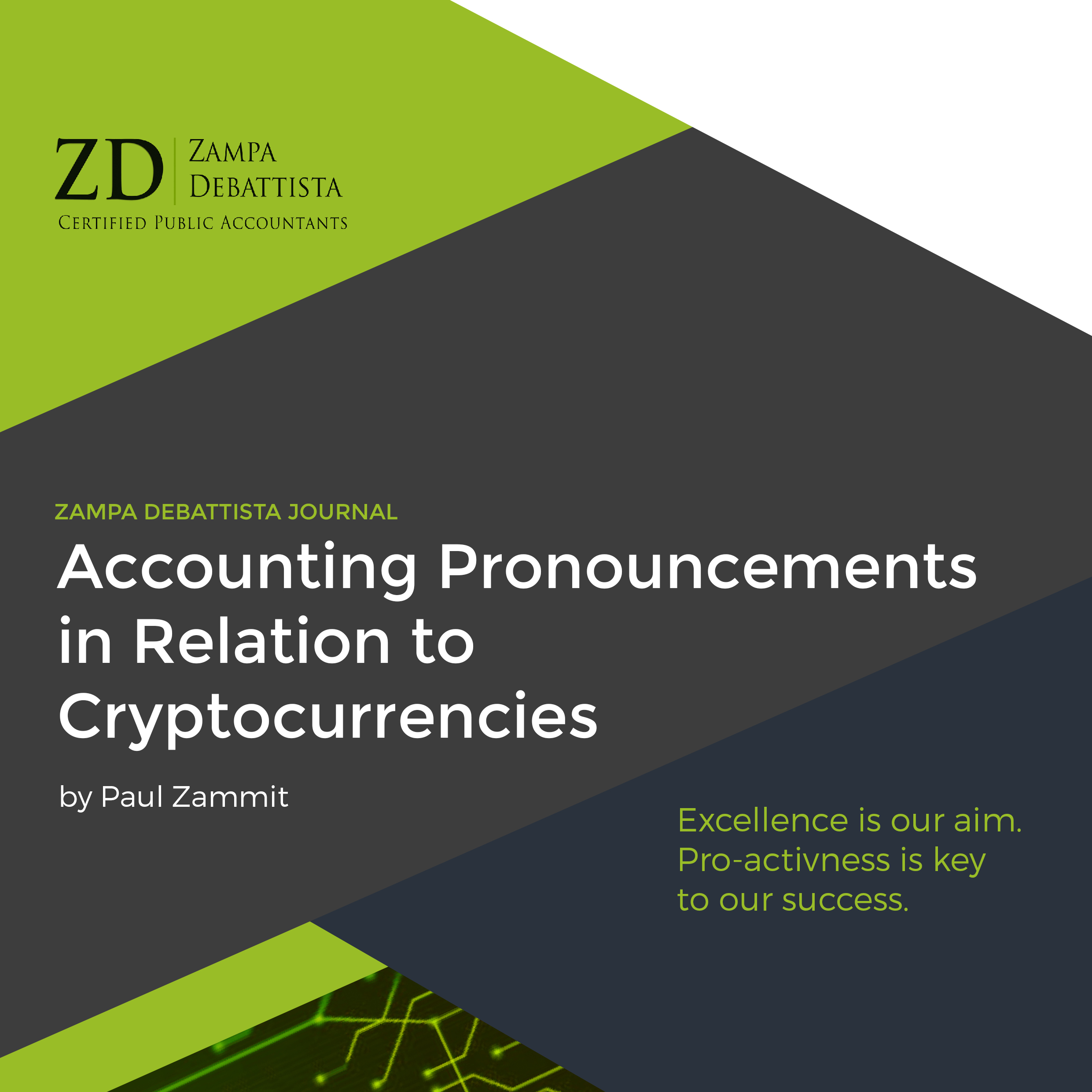 Accounting Pronouncements in Relation to Cryptocurrencies

This article tackles developments by major accounting standard bodies in relation to cryptocurrencies, such as Bitcoin and Ethereum, commonly referred to as digital currencies or virtual currencies.

Unfortunately, at the date of writing, there has been no guidance or official pronouncements with respect to the accounting treatment of crypto-assets such as utility tokens, security tokens and virtual financial assets.

In December 2016, a paper by the Australian Accounting Standards Board (AASB) ‘Digital Currency – A Case for Standard Setting Activity’[1] concluded that digital currencies, such as Bitcoin, do not fall within the scope of IAS 7 ‘Cash and Cash Equivalents’ due to a lack of broad acceptance. The paper also considered digital currencies as non-monetary items.

Moreover, the paper concluded that digital currencies are not to be considered within the scope of IAS 32 ‘Financial Instruments’, due to the absence of a contractual agreement.

The paper, by interpreting existing IFRS standards, considered that digital currencies do meet the definition of intangible assets under IAS 38 ‘Intangible Assets’ and could be scoped as inventories under IAS 2 ‘Inventories’.

The interpretative analysis by the AASB noted that in practice, some businesses would hold digital currencies in the ordinary course of business, whilst some others would not.

In the light of this, the AASB pointed out that IAS 38 excludes from its scope those intangible assets held by an entity for sale in the ordinary course of business. The latter are redirected to IAS 2. The assets within the scope of IAS 2 are valued at the lower of cost and net realisable value. However, commodity broker-traders are scoped out of IAS 2’s measurement provisions. This means that it would need to be determined whether an entity holding digital currencies in the ordinary course of business is a commodity broker-trader or not.

In theory, in the case of assets not held in the ordinary course of business (thus falling under IAS 38), entities would need to choose between the cost model and the revaluation model (with gains or losses recognised in other comprehensive income).

Despite interpretations of existing standards, in substance, the AASB concluded that both IAS 2’s and IAS 38’s measurement provisions do not provide relevant information to users of financial statements.

The AASB has concluded that fair value would be the most appropriate basis for a holding of a digital currency. Fair value measurement would provide information that is comparable, verifiable and understandable. Moreover, its value is easily observable on the market.

Thus, the AASB’s proposal was to account for digital currencies at fair value through profit or loss. Fair value through other comprehensive income (as permitted by IAS 38) was also not recommended by the AASB. This conclusion was arrived at by interpreting the situations where the Conceptual Framework applicable at that time allowed recognition of income or expenses in other comprehensive income – all deemed inapplicable to digital currencies.

The AASB also placed a strong emphasis on the need for standard-setting in the future (present?).

The AASB’s paper was dated before the 2017 surge in attention towards Bitcoin. Conversely, during the second part of 2017, the Accounting Standards Board Japan (ASBJ), which contrary to the AASB, does not apply IFRS, issued an exposure draft in relation to virtual currencies. An exposure draft was issued for public comment in December 2017, and a standard was issued during March 2018 ‘Tentative Practical Solution on the Accounting for Virtual Currencies Under the Payment Services Act’.[2]

In any case, one needs to ask whether an active market exists. If it does, the virtual currencies are to be recorded at the market price on each balance sheet date. Gains and losses are recognised in profit or loss.

The difference between assets held by an entity on its own behalf, and assets held by an entity on behalf of customers, is that in the latter case, the entity will include an asset representing the virtual currency and a liability representing the obligation towards the customer. Moreover, in such a situation, the gain on the asset would be accompanied by an increase in the liability, meaning that the gain and the loss would cancel out each other.

In the report for Q3 of 2017, the Chairman of the FASB stated that significant research activities on digital currencies have been made but are yet to be discussed.

One questions what the position of the IASB at the date of writing is. So far, no official pronouncements have been made. However, the ball may have already been set rolling, as in January 2018, discussions of transactions involving digital currencies were held.

The consistency between the AASB and the ASBJ is clear. One questions whether other accounting bodies such as the IASB and the FASB will also follow such route.

One also questions whether the IASB, and other accounting bodies, will release formal pronouncements on crypto-assets other than E-money, which are currently in constant evolution and growth, and lack accounting guidance.

DISCLAIMER: Please note that this article is being published for information purposes only. As such it does not constitute or is to be interpreted or construed as legal advice or guidance. Zampa Debattista does not accept responsibility for or be liable to any damages arising as a result of using this information as legal advice or guidance. Should you require any assistance please contact: John Debattista –  jd@zampadebattista.com, Paul Zammit  – pz@zampadebattista.com

[2] Official document available only in Japanese. In English refer to the EFRAG paper on virtual currencies (which makes reference throughout to the ASBJ standard) or the following link: https://www.asb.or.jp/en/wp-content/uploads/20180315-01_e.pdf